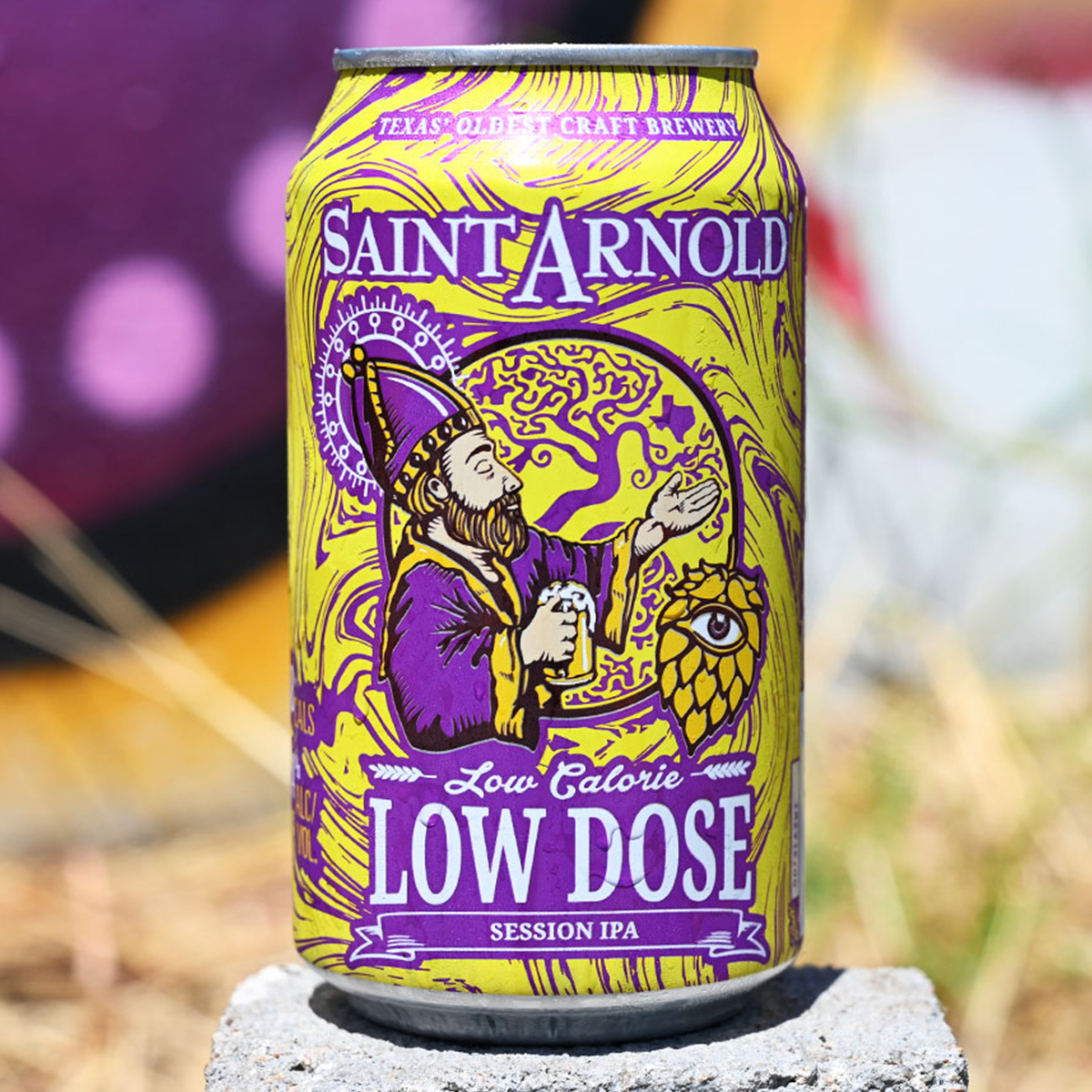 As segments of the craft beer drinking population have become more calorie conscious, the innovation team at Saint Arnold was posed with a challenging task – could we make a flavorful and aromatic IPA (the most popular style of craft beer at the moment) that also features a low calorie count?

Before exploring the process it took to create a low calorie IPA, there is one disclaimer worth mentioning. At Saint Arnold, we weren’t willing to sacrifice the overall quality of a beer just to achieve a marketable calorie count. The beer is always first. This might mean that Low Dose Session IPA, at 118 calories and 7g of carbs, doesn’t meet the domestic light lager definition of low, but with most IPAs ranging from 190-200 calories per 12 ounce serving, Low Dose offers the IPA drinker a significant caloric savings per can.

In order to create Low Dose Session IPA, there was a primary challenge – how do we brew a low calorie beer that boasts pleasant mouthfeel alongside the hop bitterness, flavor, and aroma discerning IPA drinkers expect?

As a guidepost, there are roughly 15-20 calories per alcohol percentage in beer. Then, if there is residual sweetness in the finished beer, which there typically is, this adds to the overall calorie total. Typically, low calorie and low ABV beers have a thin body and very little mouthfeel. We strived to avoid this issue by using Golden Promise as our base malt and throwing in some Golden Naked Oats for good measure. These two malts work together to create an elevated mouthfeel and texture, avoiding the dreaded overly thin body.

Now that we had a base, how could we showcase great new hop varietals and keep the bitterness in balance? We went with a couple of new products available to commercial brewers. First is a new hop varietal called Bru-1. It is well known for pineapple, mango, and other tropical flavors. Then, to help increase flavor and aroma while contributing minimal bitterness, we use Citra Incognito®. Incognito® is a 100% all-natural hop product crafted to deliver highly concentrated flavor and aroma.

For fermentation, we went a unique route and utilized the same Kölsch yeast used in Lawnmower. Compared to Lawnmower, we ferment Low Dose a bit warmer in order to generate extra fruity esters from the Kölsch yeast.

We feel that we’ve truly thread the needle with Low Dose. For 4.4% ABV, Low Dose has an appropriately light but satisfying body. It showcases wonderful hop aroma and flavor, but the bitterness never becomes too overwhelming for the beer as a whole. So, if you have your mind made up that low calorie can’t be good, please allow us to enlighten you.

What Makes a Good Summer Beer?